(CNN) Serena Williams never thought she would be playing tennis into her mid-30s. But she has kept on going — and the records thus keep piling up.

When Williams thumped Yaroslava Shvedova 6-2 6-3 in the fourth round of the US Open on Monday, the American collected her 308th grand slam win to move past Roger Federer, who is currently injured, for top spot on the all-time list.

Serena Williams
Questioned about her commitment to the game by none other than 18-time grand slam winner Chris Evert a decade ago, Williams’ extensive trophy haul since that time proved the desire is there.
And perhaps those non-injury enforced mini-breaks, plus her other interests — she has her own clothing line and likes to act — have helped maintain Williams’ motivation on the tennis tour. Evert, by the way, last year called Williams the greatest women’s player of all time.
Even though Williams this week has her eyes firmly on becoming the first player to win 23 grand slam singles titles in the Open Era — which would move the 34-year-old within one major of Margaret Court’s all-time record — she took pleasure in reaching yet another milestone. 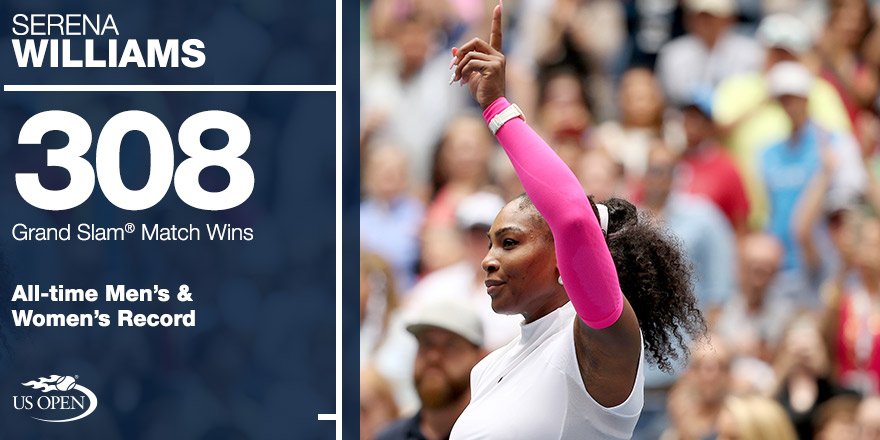 “I think it’s really exciting,” Williams told reporters. “I just think winning 308 matches in general is pretty awesome. For that to be in a grand slam is pretty cool.
“It’s a huge number. I think it’s very significant actually. I think it’s something that just really talks about the length of my career, in particular. I’ve been playing for a really long time, but also, you know, given that consistency up there. That’s something that I’m really proud of.”
Williams memorably said in 2012 that she didn’t “love” tennis but may have been slightly loose with her words. On Monday she was adamant she deeply enjoyed the sport.
Asked why she continues to put in the hard work, Williams said: “I think it just comes from a different place of the, just love and really enjoying it. I definitely never thought I would be playing still. Now I don’t really see when I’m going to stop because I’m just enjoying these moments out here, getting to break records that I didn’t even know existed or I didn’t even know was possible.
“I think when you really enjoy what you do, it’s different.”
Her victory came about two hours after older sister Venus suffered a heartbreaking loss — she was unable to convert on a match point — to Karolina Pliskova in the fourth round.
Serena continues her path at the US Open against Simona Halep in the quarterfinals on Wednesday. She has yet to drop serve and her once tender serving shoulder appears to be in good order, with the world No. 1 hitting the fastest serve of the women’s tournament Monday at 126 miles per hour (203 kph.)
Her serve is, likely, the best the women’s game has ever seen, playing a significant part in all the wins.
“I don’t think I really served in the summer until I got here to New York,” said Williams. “It was a really tough summer for me. Maybe that’s the key.”
In the men’s draw, Juan Martin del Potro beat an ailing Dominic Thiem to reach a first grand slam quarterfinal in three years. His recent upturn has the 27-year-old and his fans hoping all the injuries are a thing of the past.
There was a moment in del Potro’s clash when the Argentinian’s backers must have been holding their breath.
His career derailed by four wrist surgeries — no other grand slam winner in recent history, perhaps ever, has been hit as hard by injuries — del Potro wanted the trainer at the first changeover. The wrist wasn’t the issue but instead his serving shoulder.And in the second set, a retirement followed.
It wasn’t the 2009 winner, though, but his younger foe.

Juan Martin del Potro
Whereas the shoulder complaint to del Potro ultimately seemed minor, Thiem grimaced while striking a shot and the eighth seed called it quits with a knee injury while trailing 6-3 3-2 on center court. He has paid the price for playing too much in 2016.
For the first time since Wimbledon 2013, del Potro — who missed most of the previous two seasons due to his wrist problems — had reached the quarters at one of tennis’ top four tournaments.
“It’s never good to win a match this way,” del Potro told the crowd. “I wish all the best to Dominic.”
You know he meant it, what with all his health issues. He needed a wild card to play at the US Open since his ranking sat at 142nd.
Del Potro returned to the circuit in February and pulled off a memorable victory at Wimbledon by ousting Stan Wawrinka before tiring against Lucas Pouille — the flashy Frenchman who upset Rafael Nadal on Sunday.
Del Potro truly showed some of his older form, however, at the Olympics in Rio last month. Spurred on by Argentinian fans who made the short trip to Brazil, del Potro ousted Nadal in the semifinals and almost took Andy Murray, the most in-form player in tennis, to a fifth set in the final.

Del Potro is feeling the love in New York, too.
“I really don’t know what’s going on,” he said. “But we have a good connection, between the New York City people, between the Argentinian fans, the American fans, and I’m really enjoying playing in this stadium. It’s amazing for me.
“I was really sad at home during the last two years when I got the injury to my wrist and I was watching this tournament on TV. But now I’m here again and I will have the chance to play in the quarterfinals. That’s great for me.”
Del Potro, arguably, has the most powerful forehand ever in the men’s game; he ripped one down the line against Austria’s Thiem that drew gasps from the crowd.
Pleasingly for his supporters, he is hitting through his backhands more rather than simply slicing. Slicing eliminates the shock to his left wrist, which has been operated on three times. The next step is to add more pace to the backhand.
Del Potro next battles twice grand slam winner Wawrinka and if he triumphs, Murray looms in the semifinals. Wawrinka, forced to save a match point in the third round, had less trouble Monday despite a third-set wobble.
The Swiss ousted Illya Marchenko 6-4 6-1 6-7 (5-7) 6-3 and Kei Nishikori, the 2014 finalist, knocked out ace king Ivo Karlovic 6-3 6-4 7-6 (7-4).
“I don’t know if I’m playing better than 2009 but I keep winning and that’s important,” said del Potro. “Hopefully I can go far in this tournament because I love the atmosphere, this crowd and to be in New York.”
In the night session, Murray crushed Grigor Dimitrov 6-1 6-2 6-2, registering his fastest ever serve en route to setting up a tie with Japanese sixth seed Nishikori.

“If you don’t have mystery, you will be history”— Badree urges regional spinners to spin

latest news INEWS - April 12, 2021
0
Ramadan Message 2021 of His Excellency Dr. Mohamed Irfaan Ali, President of the Cooperative Republic of Guyana. Love of all and hatred of none I extend...

Health INEWS - April 12, 2021
0
The Ministry of Health has announced that Guyana recorded 40 new cases of the novel coronavirus (COVID-19) at the end of April 11. Additionally,...

latest news INEWS - April 12, 2021
0
President Dr Irfaan Ali said that the support for CARICOM sister nation, St Vincent and the Grenadines, will be continuous. The Head of State said...

Guyana in talks with Johnson & Johnson to acquire COVID-19 vaccines

Health INEWS - April 12, 2021
0
As the country continues to roll out its COVID-19 vaccination programme, the Guyana Government continues to approach various bilateral partners and manufacturers to acquire...

latest news INEWS - April 12, 2021
0
President Dr Irfaan Ali has said that a functioning Local Government Commission (LGC) is imperative for development and promised to support the body in...

Crime INEWS - April 12, 2021
0
The four Guyanese men who disappeared after travelling from Guyana to The Bahamas in January 2021 are now feared dead. The men are a father...

Another batch of Russian Covid vaccines arrives in Guyana

Health INEWS - April 12, 2021
0
The second batch of 30,000 doses of the Sputnik V vaccine purchased by the Government of Guyana from Russia has arrived at the Cheddi...

Ramadan teaches us to have love for all and hatred for...