U.S. Republican presidential candidate Donald Trump offered fresh details of how he would tackle illegal immigration on Saturday, saying he would crack down on those who overstay their visas as he sought to quiet criticism from conservatives.

In a campaign speech in Des Moines, Iowa, Trump also cited the shooting death of a cousin of NBA star Dwyane Wade to urge African-American voters to rally behind him, calling it an example of violence that has to be addressed.

Trump, speaking on the Iowa State Fairgrounds with hay bales stacked behind him, sought to clarify his views on how to overhaul the U.S. immigration system after saying earlier in the week that he was softening on his plan to deport all 11 million illegal immigrants.

That stance drew fire from conservatives who wanted him to stand fast after he won the Republican presidential nomination in large part by a hardline stance that would include building a wall along the U.S. border with Mexico.

In his speech, Trump said he would seek to institute a tracking system to ensure illegal immigrants who overstay their visas are quickly removed, and would propose an e-verify system to prevent the illegal community from gaining access to welfare and other benefits. 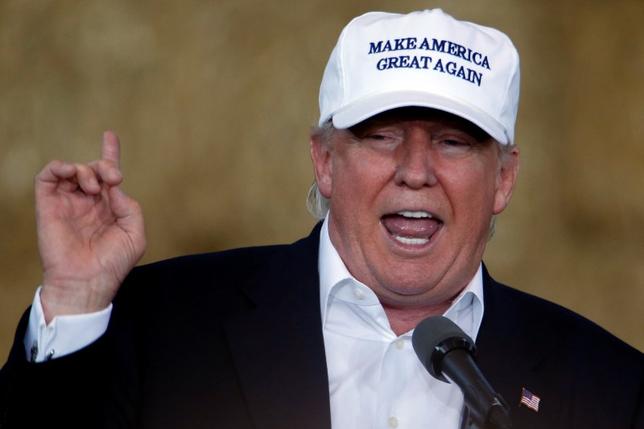 “If we don’t enforce visa expiration dates, then we have an open border – it’s as simple as that,” he said.

“Every time an African-American citizen, or any citizen, loses their job to an illegal immigrant, the rights of that American citizen have been violated,” he said. “Equal protection under the law must include the consistent application of our immigration laws.”

Trump said his first priority upon taking office next January would be the immediate deportation of thousands of illegal immigrants who remain in the United States despite having committed crimes.

“These international gangs and cartels will be a thing of the past. Their reign of terror will be over. In this task, we will always err on the side of protecting the American people – we will use immigration law to prevent crimes, and will not wait until some innocent American has been harmed or killed before taking action,” he said.

He did not explain how his plan would affect many of the illegal community who have been in the United States for decades and obeyed U.S. laws.

Trump said the death in Chicago of Wade cousin Nykea Aldridge, 32, a mother of four, was an example of turmoil in U.S. inner cities. Chicago Mayor Rahm Emanuel, a former chief of staff to Democratic President Barack Obama, has struggled in particular to contain violence in his city.

The incident permitted Trump to bring up again his desire to be a “law and order” president and underscore his drive to appeal to African-American voters who traditionally vote Democratic and overwhelmingly support Democratic rival Hillary Clinton.

Trump raised the subject after sending out tweets earlier in the day that prompted charges of insensitivity to the death and accusations he sought to exploit it for political purposes.

The New York businessman was the headline speaker at “Joni Ernst’s Roast and Ride,” a charity event for military veterans run by U.S. Senator Joni Ernst, a Republican.

Ernst and most other speakers offered praise for Trump, a rarity at a time when many Republican political leaders have distanced themselves from his candidacy due to his incendiary rhetoric. Trump is running neck and neck with Clinton in polls in the state with 72 days until the Nov. 8 election.

EYEWITNESS INEWS - June 22, 2021
0
…wrought by PNC As to whether the PNC has done anything FOR Guyana is questionable! But for sure they’ve done a helluva lot TO Guyana,...

Crime INEWS - June 22, 2021
0
The body of a 44-year-old fisherman of Abary, Region Five (Mahaica-Berbice) was today fished out of an outfall following a horrific accident yesterday afternoon. David...

Health INEWS - June 22, 2021
0
Three more persons who were infected with the novel coronavirus have died, taking the country's death toll to 452. The latest fatalities are a 32-year-old...

latest news INEWS - June 22, 2021
0
The Timehri to Bartica road link, which will see the Government constructing a valuable link that would cut down on travel time to Bartica...

Bisram moves to CCJ to set aside Guyana’s CoA ruling for him to stand...

Court INEWS - June 22, 2021
0
Lawyers for Marcus Bisram have filed a Notice of Appeal detailing the grounds on which they intend to rely to set aside a ruling...

“For me, it is not so much an issue of the authenticity of the...

Crime reducing in almost all categories in Region Five – Commander

Crime INEWS - June 22, 2021
0
Region Five (Mahaica-Berbice) is seeing a reduction in crime in almost all categories, when compared to the same period last year, according to Commander...

AG files $20M lawsuit against Ferguson for slander over claims he...