(REUTERS) Indian soldiers killed eight people trying to cross the disputed border with Pakistan in Kashmir on Tuesday and security forces were also fighting suspected militants near the frontier, army officials said, two days after a major attack on an Indian base.

The flare-up in violence comes after India blamed Pakistan for Sunday’s attack on the brigade headquarters in the town of Uri near the border that killed 18 soldiers, heightening already tense relations between the nuclear-armed neighbours.

Pakistan denies any role in the raid, one of the deadliest in the divided Himalayan region over which India and Pakistan have fought two of their three wars.

A senior Indian army officer told Reuters that his men had spotted a group of intruders trying to cross into Indian territory around Uri on Tuesday. The troops killed at least eight, and had set out to retrieve the bodies and hunt for any survivors, he said.

Army spokesman Manish Kumar said a number of infiltrators had been killed, but he could not confirm how many.

Indian security forces were also fighting four to five militants in the Nowgam area close to the Line of Control (LOC), a senior army officer said, the de facto border where thousands of Indian and Pakistani troops face off against each other.

“In the morning we saw the LOC fence was cut. We launched an operation and we have trapped around 4-5 militants,” he said.

In Muzaffarabad in Pakistan-controlled Kashmir, a Pakistani colonel said there was no firing along the border. Both sides were on high alert and strengthening their positions, he said. 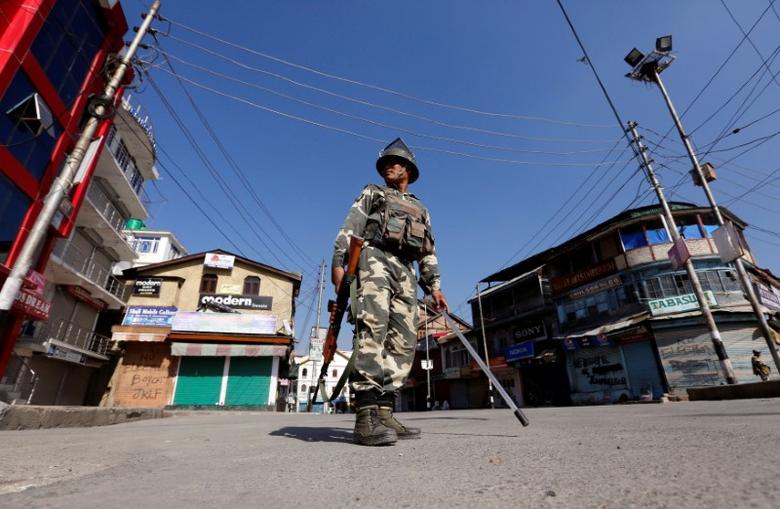 An Indian policeman stands guard in a deserted street during a curfew in Srinagar September 19, 2016. (REUTERS/Danish Ismail photo)

Pakistani Foreign Office spokesman Nafees Zakaria reiterated that no shot had been fired by Pakistan, after Indian television channels said troops of both countries had exchanged fire.

“There seems to be some activity across the border but there has been no activity from our side, not one shot fired from here,” he told Reuters.

India says Pakistan is helping smuggle fighters across the border, but says the number of infiltration attempts has dropped over the last decade. The army said that before Tuesday it had foiled 17 attempts this year, and killed 31 suspected militants.

Senior politicians in Prime Minister Narendra Modi’s government have warned that action will be taken against Pakistan after Sunday’s assault, but India’s options to hit back appear limited given the risk of escalation.

Pakistan accuses New Delhi of using the attack to deflect attention from unrest in the portion of Kashmir India controls.

More than 80 civilians have been killed in protests, spearheaded by locals, that erupted after Indian security forces killed a popular Kashmiri militant leader in July.

latest news INEWS - June 15, 2021
0
After a marathon session that lasted until the wee hours of today, the People's Progressive Party (PPP) was able to pass a motion ejecting...

Court INEWS - June 15, 2021
0
The filing of a Notice of Motion by Attorney General Anil Nandlall, SC, for the Guyana Court of Appeal to strike out an appeal...

EYEWITNESS INEWS - June 14, 2021
0
…and PNC/APNU coalition Well, who said the PNC’s coalition fig leaf was ripped away with the departure of the WPA and JFAP leaving their nakedness...

Over $600M in interest paid on APNU+AFC-negotiated GuySuCo bond

Business INEWS - June 14, 2021
0
The $30B syndicated bond which the PPP/C Government has inherited from the former APNU+AFC administration, has so far forced the payment of a whopping...

Health INEWS - June 14, 2021
0
The Barima-Waini (Region One) is now leading the Ministry of Health's COVID-19 vaccination campaign. Over 53 per cent of the Region’s adult population has...

Crime INEWS - June 14, 2021
0
STATEMENT FROM MHSSS and CPA The Ministry of Human Services and Social Security (MHSSS) and its Childcare & Protection Agency (CPA) are saddened at the...

Health INEWS - June 14, 2021
0
The country has recorded four more fatalities from the novel coronavirus, taking the overall death toll to 430. The latest fatalities are a 39-year-old man...

Health INEWS - June 14, 2021
0
The Guyana Government may not acquire Covid-19 vaccines from US-manufacturers Pfizer and Moderna until 2022, according to Health Minister Dr Frank Anthony. He made this...