(REUTERS) Hillary Clinton’s personal doctor on Sunday said she was suffering from pneumonia after the Democratic presidential candidate fell ill at a Sept. 11 memorial, in an episode that renewed focus on her health less than two months before the U.S. general election.

Clinton was diagnosed on Friday, but her condition only came to light several hours after a video on social media appeared to show her swaying and her knees buckling before she is helped into a motorcade as she left the memorial early today (Sunday).

Clinton had a medical examination when she got back to her home in Chappaqua, New York, according to a campaign aide. Her doctor, Lisa Bardack, said in a statement that she has been experiencing a cough related to allergies and that an examination on Friday showed it was pneumonia.

“She was put on antibiotics and advised to rest and modify her schedule. While at this morning’s event, she became overheated and dehydrated. I have just examined her and she is now re-hydrated and recovering nicely,” Bardack said.

It was not yet clear whether Clinton would stick to a hectic schedule that has her travelling to California on Monday for several campaign and fundraising events.

Regardless of how much the illness curtails her campaigning, the diagnosis comes at a crucial time in the White House race against Republican rival Donald Trump. The first of three debates is on Sept. 26 and the election is on Nov. 8.

The 68-year-old Clinton abruptly departed the high-profile, televised event at Ground Zero and was taken to her daughter Chelsea’s home in Manhattan. She emerged around two hours later on a warm and muggy morning, wearing sunglasses and telling reporters that she was “feeling great.”

The video that showed her swaying and buckling with aides holding her up came from an unverified Twitter account under the name Zdenek Gazda, who did not respond to a request for comment. The Clinton campaign did not respond to repeated requests for comment about the authenticity of the video. 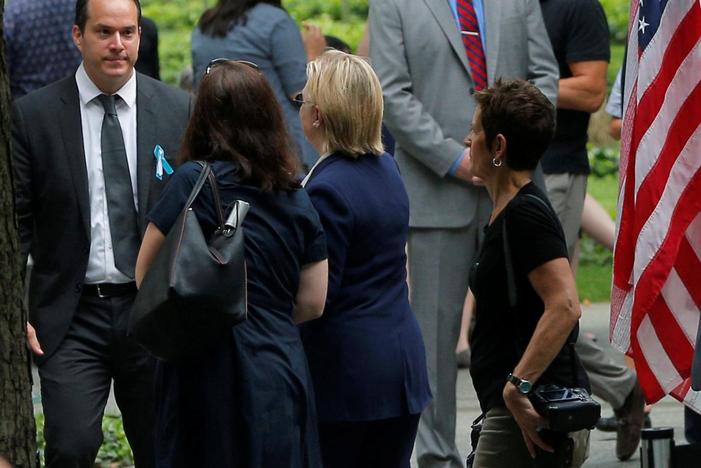 Political strategists said the campaign should confront the health issue head-on to tamp down any concerns, particularly as Republican rival Donald Trump and some of his high-profile supporters have repeatedly argued that she lacked the “stamina” to battle adversaries abroad.

For Bud Jackson, a Virginia-based Democratic strategist, the statement from the doctor was a good start.

“I think they did the right thing. They had her examined and put out a statement. It means less speculation,” Jackson said.

Jackson said Sunday’s incident will be “instructive” for the campaign and should encourage more transparency from the Clinton camp about her health. It is in their best interest to disclose anything in the future, he said, rather than have it leaked or exposed via another episode like Sunday’s. 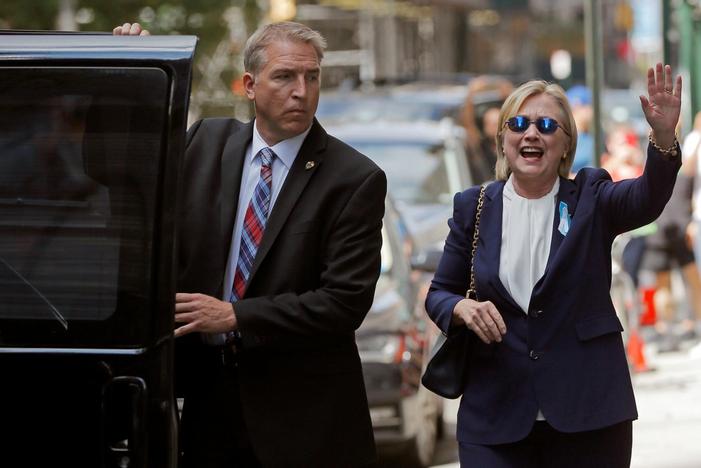 As the solemn ceremony began at the site of the World Trade Center that was attacked by two hijacked airliners 15 years ago, there was patchy sunlight, with temperatures at about 80 degrees Fahrenheit (26.6 Celsius). But the high humidity early into the ceremony caused it to feel much hotter in the crowd at times.

Clinton wore a high-collared shirt and a dark pant suit and donned sunglasses for the morning event. Democratic Representative Joe Crowley of New York, a Clinton supporter who attended the event, told Reuters that it was “incredibly, stiflingly hot” during the ceremony.

Clinton’s pneumonia diagnosis follows a wave of conservative conspiracy theories that circulated in recent weeks suggesting that Clinton’s coughing was a sign of deeper problems.

Clinton’s speech at a campaign rally earlier this month in Cleveland was interrupted by a coughing spell. During the speech, she quipped, “Every time I think about Trump I get allergic.” She then resumed her speech.

Past presidential candidates have released much more detailed information about their health than either Trump, 70, or Clinton.

For example, John McCain, the failed 2008 Republican presidential nominee, allowed reporters to see 1,173 pages of medical records after concerns were raised about a cancer scare.

Clinton has been in the news before for serious health issues.

In December 2012, she suffered a concussion and shortly afterward developed a blood clot.

In a letter released by her doctor in July 2015, Clinton was described as being in “excellent health” and “fit to serve” in the White House. It noted that her current medical conditions include hyperthyroidism and seasonal pollen allergies.

The diagnosis and illness on Sunday come after some tough days for Clinton, as national polls showed her lead over Trump diminishing. A Reuters/Ipsos poll of likely voters showed an 8-point lead for Clinton had vanished by the last week of August.

On Saturday, Clinton came under fire from Republicans and on social media for saying Friday night that “half” of Trump’s supporters belonged in a “basket of deplorables.” She later said she regretted using the word “half.”

Trump has also been under pressure to release detailed information on his health and medical history.

Instead, in December, Trump’s doctor wrote in a short letter that was made public that his blood pressure and laboratory results “were astonishingly excellent” and that he would be “the healthiest individual ever elected to the presidency.”

EYEWITNESS INEWS - June 22, 2021
0
…wrought by PNC As to whether the PNC has done anything FOR Guyana is questionable! But for sure they’ve done a helluva lot TO Guyana,...

Crime INEWS - June 22, 2021
0
The body of a 44-year-old fisherman of Abary, Region Five (Mahaica-Berbice) was today fished out of an outfall following a horrific accident yesterday afternoon. David...

Health INEWS - June 22, 2021
0
Three more persons who were infected with the novel coronavirus have died, taking the country's death toll to 452. The latest fatalities are a 32-year-old...

latest news INEWS - June 22, 2021
0
The Timehri to Bartica road link, which will see the Government constructing a valuable link that would cut down on travel time to Bartica...

Bisram moves to CCJ to set aside Guyana’s CoA ruling for him to stand...

Court INEWS - June 22, 2021
0
Lawyers for Marcus Bisram have filed a Notice of Appeal detailing the grounds on which they intend to rely to set aside a ruling...

“For me, it is not so much an issue of the authenticity of the...

Crime reducing in almost all categories in Region Five – Commander

Crime INEWS - June 22, 2021
0
Region Five (Mahaica-Berbice) is seeing a reduction in crime in almost all categories, when compared to the same period last year, according to Commander...

AG files $20M lawsuit against Ferguson for slander over claims he...